Global conditions like sodium reduction initiatives and disruptions in supply and pricing of lactic acid mean acetates are getting increased attention. Here, we describe their efficacy as a preservative to reduce food waste and sodium content in meat.

Meat preservation is a serious business—and rightly so, as contaminated meat carries the possibility of such health threats as Listeria, Salmonella and E. coli. These well-known pathogenic bacteria, which can proliferate in unprotected meats, can lead to a range of deadly medical conditions. For global consumers, the ongoing fear of meat contamination as a threat to human health keeps meat products at the top of the list whenever the subject of food safety arises. Fortunately, the risk can be controlled with proper care and attention paid to preservation techniques and products.

In addition to ensuring safe consumption for individual consumers, meat preservation and protection is an important and valuable component of a global food supply chain charged with feeding a global population set to rise from seven billion currently to nine billion by the late 2030s. For perspective, over one-third of all food produced today ends up in either the “loss” or “waste” category, costing the global economy an estimated $940 billion annually and contributing 8–10% of worldwide greenhouse gas emissions. Since meat represents the highest category of economic and environmental impact of wasted food globally, the preservation and protection of meat is more than just a personal issue—it’s a society-wide concern.

Lactates are the most common preservative in meat 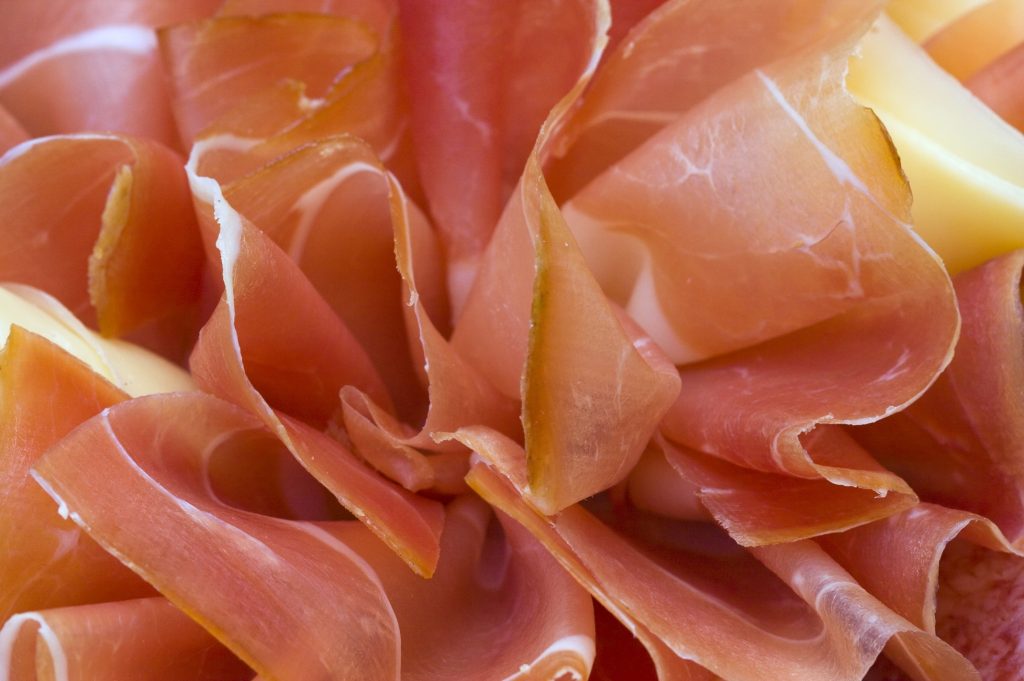 Formulating solutions for meat food safety requires trained microbiologists and in-application challenge and shelf-life studies. Challenge studies mimic a potential contamination to demonstrate a preservative can keep food safe during a worst-case scenario. The food safety process takes time and is not an area in which it is worth the risk to try something new on a whim to “see if it works.” Solutions based on the salts of organic acids, e.g., lactic or acetic acid, are time-tested meat safety and shelf-life extension solutions.

Of these, sodium-lactate—based on lactic acid—is the most commonly used conventional meat preservative in the marketplace today. Lactates have a robust market share following their rise decades ago as a preferred solution for inhibiting microbial growth in meat. Lactic acid has a strong history in carcass decontamination used in hot water solutions. In its sodium neutralized form, besides protecting meat, sodium lactate adds a light salty flavor.

The downside—hiding in plain sight in the name—is that these applications are sodium-based and thus serve to raise the volume of sodium in any product that uses them. A single serving (56 g) of a market sample turkey deli meat contains 440 mg sodium, with 170 mg of that being contributed by its preservative, a market solution of sodium lactate/diacetate (dosed at 2.5%) – this 170 mg is 7% of a consumer’s recommend daily intake of sodium. This has made sodium lactate-based preservatives a key target of the salt-reduction movement.

In response, some products now use potassium-based lactate preservatives rather than sodium-based. Meat products often use a number of formulation components that contain sodium. Fortunately, producers can target these components individually to reduce the cumulative sodium level in the end product. Substituting sodium lactate—dosed up to 4% content—with a no-sodium alternative is an excellent start to substantially reducing the overall sodium load. For example, a 4% sodium lactate solution could contribute up to 272 mg of sodium to one serving size (56 g) of deli meat. With a potassium-based preservative solution, this could all be removed.

Replacement of sodium lactate with potassium lactate can cause taste challenges

Substitution of sodium lactate with potassium lactate has been a great step in tackling sodium contribution but often needs additional sensory support in application. This is because, in dosages over 1%, potassium-based solutions may deliver an “off” (sometimes described as “metallic”) taste. Lactates are often dosed at more than three times this.

Recently, this issue has become more prominent because global regulatory bodies are placing increased pressure on sodium reduction, which means there is even more pressure to reduce the sodium content contributed by preservatives in meat.

The overconsumption of salt is being targeted by food regulators worldwide, beginning with the World Health Organization (WHO) and most recently the United States Food and Drug Administration (FDA). In October 2021, the FDA released its updated 2.5-year guidance, goals and recommendations for sodium reduction in foods and beverages. The chief goal is to persuade the food industry to voluntarily reduce sodium content from a daily average of 3,400 mg/person to 3,000. The FDA’s reduction targets for meat are particularly aggressive, encouraging a reduction of up to 20% in products like breaded chicken while many other product categories have reduction targets of 10-12%.

This has a rising number of food companies attempting to comply with the current WHO guidance, and many are looking ahead to potential future regional regulatory actions. Since these efforts can struggle due to increased costs, technical difficulties and/or impact on flavor, however, the larger challenge is to naturally protect (or enhance) taste using less sodium while preserving food safety.

With all this in mind, acetate-based meat preservatives—derived from acetic acid—are an option now receiving more consideration.

It was about a decade ago that one of the more exciting features of acetate-based preservatives was revealed: they are effective at five to seven times lower dosages than lactates at the same pH level. The efficacy at low doses is due to a higher undissociated acid content. This means less preservation product is needed while still meeting vital food safety standards. In more technical terms, the positive effects of acetates are higher in the neutral-pH zone—a key reason lactates can be replaced by applying acetates at a much lower dose. Put simply, acetates are very efficient. Achieving equal protection using lactates requires a much larger dose, and that’s where taste and cost issues can come into play in some products. Due to the effectiveness of acetate-based preservatives, even many lactate-based products today are lactate-diacetate blends. 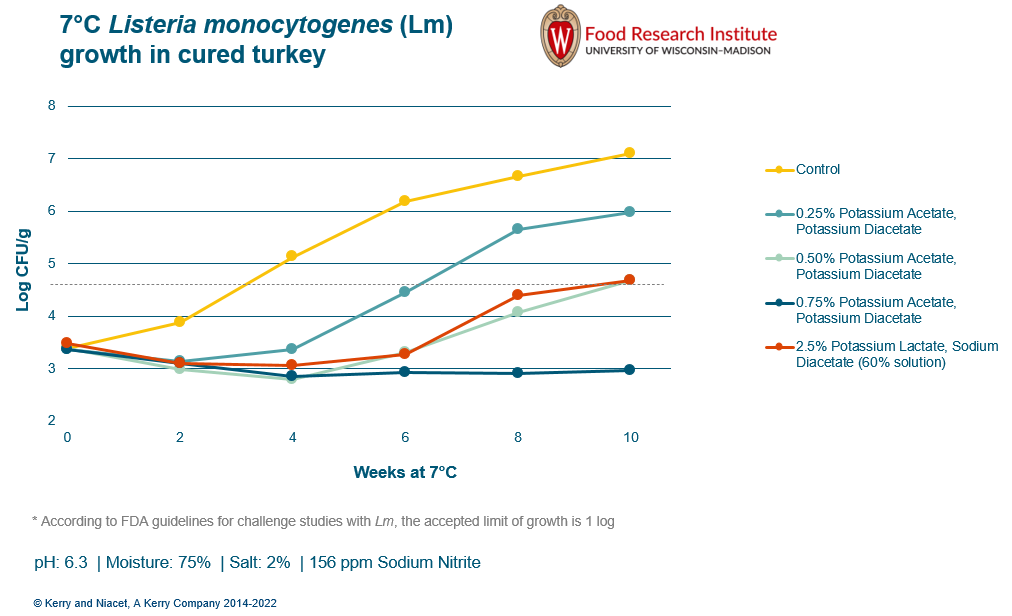 The latter item is especially noteworthy because it’s in stark contrast to the supply-chain disruptions and rising price volatility lactic acid seems destined to face for the foreseeable future.

With many of the preservative solutions currently on the market (both conventional and those offering a clean label) having a sodium base that contributes more sodium to the final product, the need for solutions has led to a slow but steady shift in preservation protocols. Meat applications are notoriously challenging in terms of meeting sodium targets, so sodium-based preservatives are ground zero for reformulators.

It’s also worth noting here that reducing sodium can create challenges when formulating for shelf life, and these must not be ignored. For the meat industry, the race has begun to uncover solutions that will replace sodium’s role in the protection, preservation and flavor of meat products without negatively impacting the lifespan of products. However, managing application developments and challenge tests for improving preservatives takes time, making it vital for meat processors to initiate the process without delay.

Acetates provide flexibility in terms of a product’s sodium “budget,” delivering a key advantage in any reformulation effort. Applying a sodium-free version of acetates means greater “leeway,” i.e., extra room, to retain some salt content in order to maintain taste. The possibility thus emerges for a significantly reduced amount of sodium in the final product with little to no negative effect on flavor.

It’s essential to make sure that preservatives are effectively doing their job when reformulating products, and the most common way this is done is to research and develop application and challenge tests. A key tool to make use of in this area is the well-established and independent Food Spoilage and Safety Predictor (FSSP) software. Developed by the University of Denmark and accepted by regulatory authorities, the FSSP provides a significant advantage in modeling and predicting the effect of product characteristics, pH, temperature and storage conditions on meat shelf life and food safety. The result for meat processors is a means of determining—accurately—how much preservative will be needed to achieve their shelf-life and safety objectives.

FSSP is highly specific about the Listeria controls that exist in cold, stored meat products. This information can be used to document whether Listeria monocytogenes, Salmonella and E. coli are able (or unable) to grow on a particular ready-to-eat product. The FSSP model can also predict the effect of acetates and lactates and organic acids in general terms, and can be used to facilitate the development or reformulation of lightly preserved foods during the process of developing products with reduced sodium content. 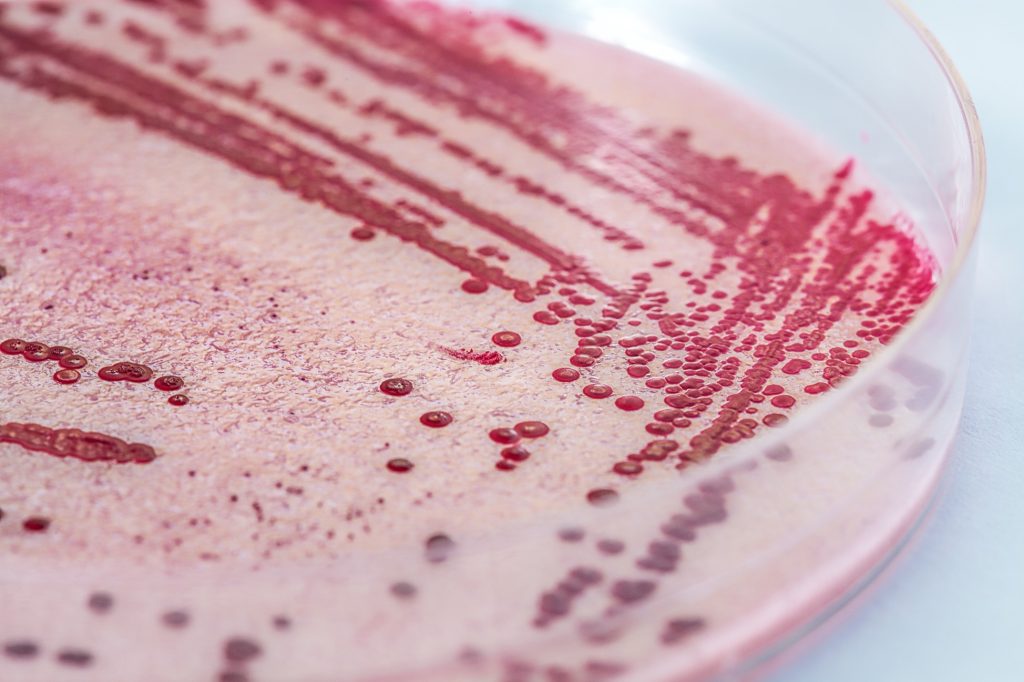 With its positive attributes of versatility, eco-friendliness and general safeness, lactic acid is one of those ingredients for which global demand has outstripped supply. For meat processors, the supply challenges around lactic acid should be of strong concern when it and its derivatives—such as lactates—are the products being used to control pathogenic bacteria in meat. In short, for those charged with ensuring meat’s safety for consumption, reliability of supply is paramount.

Why all the supply issues? In addition to its food protection role, lactic acid is used in a wide range of other industries and applications, including bioplastics and other uses that emerged during the pandemic. Many industries favor lactic acid over other ingredients given that it’s a natural product and acts as a flavor enhancer in some cases. Due to lactic acid’s wide (and growing) range of uses, its environmental benefits and the production challenges it faces, supply disruptions and shortages are inevitable and not expected to end anytime soon. The possibility also exists for rising prices in the future, that will make lactic acid increasingly less economical. All of these factors are fostering changes in meat processing processes, which in turn are pushing food and meat processors to work ahead to examine all viable, sustainable solutions.

Finding a way to provide effective food safety while decreasing reliance on lactic acid will help ensure a safe food supply as meat processors work to address the booming call to reduce sodium content. Since acetates can be effective at low doses while contributing minimal sodium, there is a growing likelihood we will see them more commonly used in meat.